A couple of days ago I started thinking about the flat in Notting Hill where Gerry and I stayed for a summer. It was quite an annoying time, we were in-between flats, most of our belongings were stored in a metal box somewhere far away in the industrial badlands of North London. We had to commute for over an hour in cramped tube carriages to get to the studio. I didn’t know many people in Notting Hill. I often felt lost and lonely and very underdressed.

But a couple of days ago that strange thing I’m going to call “apartment nostalgia” hit me. I tend to get this a couple of years after I’ve moved from a place. I doesn’t happen with all of the places I’ve lived in, but it seems to happen to the flats and places where I didn’t feel totally comfortable.

This is what I remember now.

It was a flat full of light on a lazy side street with leafy trees and eccentric neighbours. The summer was warm and the air often rain-heavy and soft. I used to lay on the bed by the window, with the blind half open, reading Anna Karenina.

The sash windows were creaky and difficult to open. If you looked out you could spy on the mad neighbour with an astro turfed balcony full of bright plastic flowers and pink plastic flamingoes.

It was often quiet. At night we only heard the wind rustling in the trees. There was an amazing shower and a small kitchen where we cooked expensive food from the local Sainsburys. I wrote a book in that flat. It wasn’t a very good book and it’s now only forgotten kilobytes on an old harddrive. But during a couple of months its pages were strewn out on the carpet on the floor in that flat.

We put all our books in the built in book shelf on one wall even though we only lived there for a couple of months. When it was time to leave there were many things to carry and pack down and the man with a van didn’t show up and then he did, but pretended he was someone else because he’d kept Gerry waiting.

We spent a summer in that flat between the royal wedding and the riots. I didn’t like it very much back then, but now it feels like a magical kind of place. 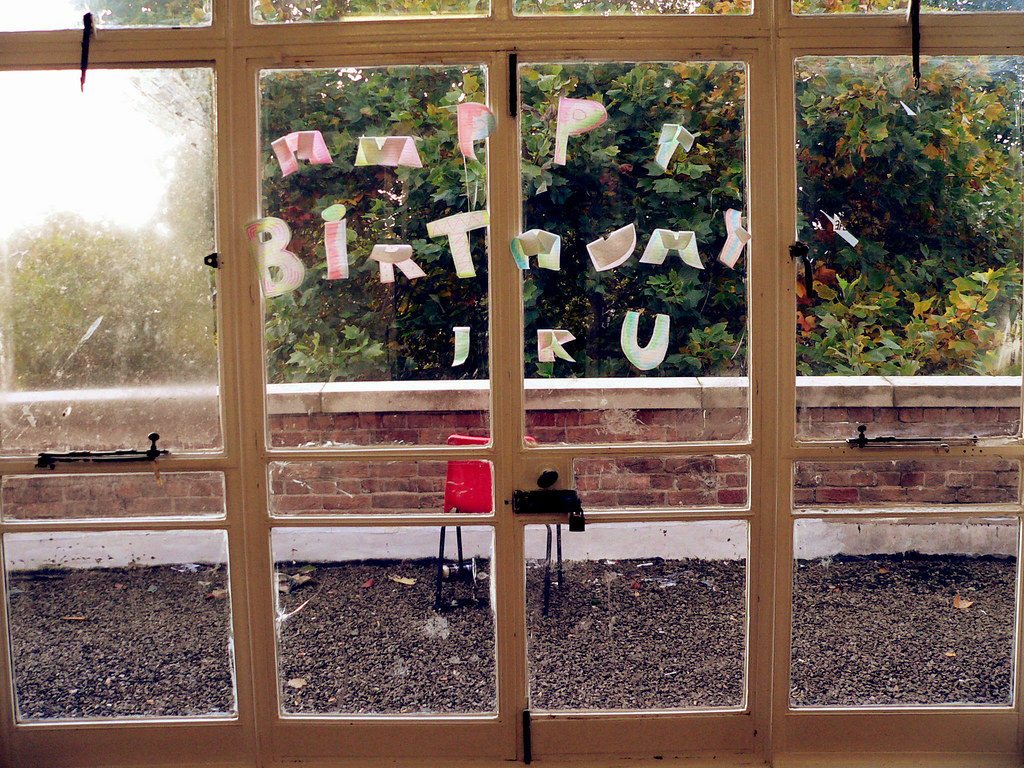 I lived there for a month. It was a cold, mouldy brick mansion that according to local hearsay had once been a young offenders institution or a Victorian mental asylum. Now it was a tired hall for students who couldn’t afford to pay very much in rent. I was interning at the BBC. I was 20.

My room was small and there was water dripping from the window. I’d bought all my bedding from Primark in one mad rush after having spent the first night sleeping underneath my winter coat. I didn’t have any internet and spent the evenings reading trashy novels and playing solitaire. The other students sharing my kitchen came from Norway, Africa and South London. I didn’t speak to many of them. The kitchen had mice. I mainly ate blueberry cereal with lots of milk that turned purple and sweet.

The common room was always cold and had the same birthday party decorations blue-tacked to the windows and walls during the whole month I lived there.

Almost every day I took the bus into town. One early morning I walked and was told off because I’d crossed through the most dangerous parts of Manchester. It felt pretty safe to me.

A year earlier I had dated a boy who lived in the same halls and I thought about how funny it is that we sometimes return to the places where we’ve been, even though we never planned it or thought about returning. Life sometimes gives you a sneak peek of what’s to come.

Now it makes me feel a bit nostalgic. Perhaps I just miss the freedom of that month. Of coming back to the city where I’d spent a very happy year, not knowing anyone anymore and no one knowing me. My time was completely my own. It was a good month. I spent it walking around the city discovering new places. I spent it eating cold cereal for dinner and dreaming about the months to come.

Do you feel nostalgic about any of the places you’ve lived in? I’d love to hear your stories.